Aron Govil is a leading entrepreneur with his global businesses who has gained worldwide prominence through his hard work, patience, brilliance, and indomitable spirit. He runs a large corporate group owned by a person of Indian origin, involved in energy, environment, infrastructure, and entertainment fields.

Today, his flagship company Ducon is a dominant market leader with its proven technologies that can provide single-source responsibility for executing major turn-key projects throughout the world.

Ducon is a leading and unchallenged equipment supplier to the world’s FORTUNE 500 industrial companies and utilities in the power, petrochemicals, steel, mining, refining, food, and chemicals sectors. Ducon brand has become famous for quality artistry, rugged construction, and long service life and has completed over 30,000 projects worldwide since its inception in 1938. In addition his businesses  have been at the forefront of innovative technologies for many years as they have secured over 30 patents in various technology fields.

During the desert storm in America, Aron Govil developed a device installed inside US tanks to remove dust particles causing breathing trouble to soldiers inside the tanks.

His companies also developed new technology to safely destroy leaking fuel propellants from stockpiles of minuteman missiles in the underground silos for years during the Cold War. In addition, his Company’s electronic systems are used to reduce energy consumption in commercial buildings and industrial complexes.

Aron Govil‘s achievements in his enterprising life are a saga of a courageous businessman devoutly engaged in undertaking divergent business ventures in challenging circumstances because of his penchant for the thrill of accomplishment. Passing through his life’s ordeals with adventurous spirit and caliber, besides hitting away from the entrepreneurial hiccups in the course of his struggles to make an exemplary success in the world of business,

Aron Govil has proven the fact that an individual’s concerted efforts never go in vain. With his belief in being happy with what he is blessed with, Aron exhorts enhancing endeavors for further development and assigning more importance to humanitarian services than earning eminence for his noble deeds. Despite being a leading entrepreneur, he still considers that spiritual satisfaction can be derived from healing humanity rather than hoarding material wealth. 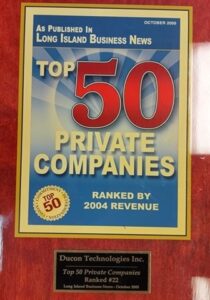 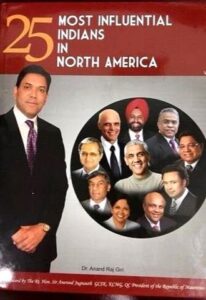 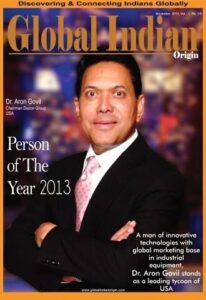 Person of the year award